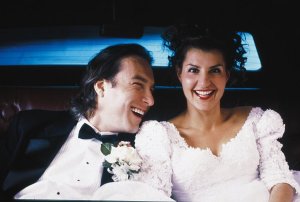 Menu items include specials for the 2nd Annual Great Plates of Downtown Lowell!

Join us this February as our “Food &  Film” series continues at Lowell’s renowned Athenian Corner Greek Restaurant with an upbeat screening lovingly selected to take your mind off the cold, dark days. And with the focus on great food and great music, it’ll also be just plain FUN!

Writer and screen actress Nia Vardalos’ 2002 sleeper hit romantic comedy My Big Fat Greek Wedding surely falls into the “just plain fun” category. It was the little indie film that could when it was released, and was shot on a mere $5 million budget. But it was a bonafide crowd pleaser, raking in over $368 million worldwide and became that year’s 5th highest grossing film. Though it never reached #1 at the box office, it continues to be a cult classic, especially among those who really appreciate a good Cinderella story. Vardalos is absolutely charming, and her hot love interest, actor/musician John Corbett, was already gaining fans via his 1990’s Northern Exposure stint as the quirky, philosophising DJ, Chris Stevens (though gal pals would eventually come to know him better as Adrien, one of Carrie’s men du jour in HBO’s Sex and the City.)  *Note from author Suzz C.: Northern Exposure continues to be my personal favorite television series of all time.

If you haven’t stopped by Lowell’s Athenian Corner Restaurant in a while, you are due for a visit. The food continues to be great and the staff is always warm and wonderful.  PLUS, Athenian Corner will be a featured restaurant for the 2nd Annual Great Plates of Downtown Lowell — guests can enjoy a featured app, entree, and dessert for a low fixed price!

Save the date for us in February, and bring a posse. As always, we encourage folks to come dine-in at Athenian Corner and enjoy some great food and drinks before or during the movie. Your suggested donation of $5 (or more if you wish) will help us defray the cost of the event, so many thanks in advance!

Hope we see you there!