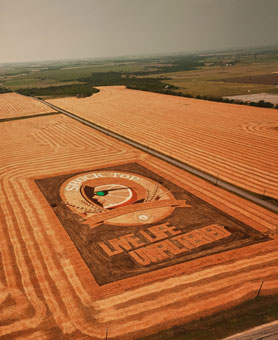 Well THIS is mighty interesting. As some of you may know, we’ll be screening Chris Ordal‘s acclaimed independent film Earthwork on Tuesday, September 13 at the Art Gallery at Jeanne D’Arc Credit Union, right here in Lowell. Coincidentally, we just learned that the subject of Ordal’s film, renowned crop artist Stan Herd, is actually IN BOSTON this month creating an earthwork as part of a marketing campaign for Shock Top Beer. Incredible! Apparently, Herd hit a couple of hot spots in the U.S. creating earthworks that feature the Shock Top logo — Austin, Orange County, and Boston were the targets for the tour which began in May. It’s a brilliant campaign, and hopefully an effective one for the Belgian brew and a lucrative one for Herd.

The video below is a promotional segment created by the Straub Distribution Company highlighting the Orange County earthwork unveiling at Orange County Great Park this past June — it includes a brief still of a fan with Stan Herd himself at the end of the segment:

We’ll be keeping tabs on the progress of Boston earthwork via the Shock Top website which also links to their Facebook page. And yes, we DID entertain tracking down Stan given that he’s in the area — if we do, we’ll absolutely keep you posted. Here’s the link to the entire campaign, off the Shock Top website (under “Fun Stuff”): shocktopbeer.com/s/index.php/earthworks/. Be aware that you may have to enter your birthdate before entering the site as they impose age verification. Fascinating stuff – enjoy!