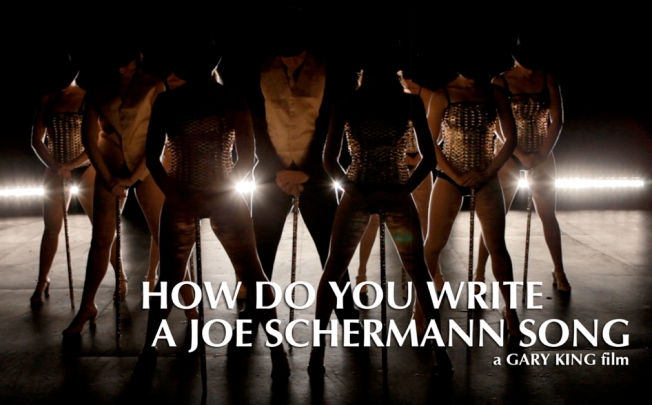 When it comes to musicals — be they screen or stage — the Lowell Film Collaborative stands divided. But the LFC half that DOES adore the genre, adores it with great passion. For me, Suzz Cromwell, discovering filmmaker Gary King and his current project, How Do You Write A Joe Schermann Song, has been glorious. My music roots run deep — as a high schooler, I was a vocal major at the High School for Performing and Visual Arts in Houston, Texas, and continued vocal studies in Boston at the Berklee College of Music. I also grew up in a culture-dork family who enjoyed going to plays and musicals together as well as film (of course). Watching my father shed silent tears at the end of “Oklahoma” or “Fiddler on the Roof” will always be a vivid memory. I was struck by his transparent man-emotion, and admire him for it to this day. I’m a groupie for “Les Mis” and “Phantom of the Opera” (original casts, please) and loved my frequent trips to the Big Apple to see the latest Broadway bits throughout the 90’s and early 2000’s. Though I feel a bit out of touch with the current musical movement, this important performance genre will always draw me back to my youth and my days as a misfit high school arts-hound.*

There seems to be a bit of this in Gary King as well, and I’m thrilled to see it. I am particularly inspired by his Director’s Statement, which I will share in its entirety:

“How Do You Write A Joe Schermann Song is a new feature film musical that we filmed in the summer of 2010. Even though this film celebrates all that I love about Broadway musicals, I attempted to tell the story cinematically by grounding it in the reality of today’s modern world. It will not be your typical “song and dance” musical as the goal of the film is not to be a spectacle, but rather a more intimate tale about an aspiring Broadway songwriter who jeopardizes his relationships and budding career after showing interest in a talented singer. The story is relevant in that it shows the artist’s struggle in today’s time — striving for both creative and financial success.

I am thrilled to make a film in a genre that does not get much recognition anymore and I believe there is an audience out there still hungry for unique musicals. It’s something I hold close to my heart. I grew up watching them with my parents and was always in awe of the sheer talent of the actors on screen. Even back then, I knew there were a lot of moving parts and hard work that went into creating something so entertaining.

In addition to loving the genre, I wanted to showcase talented performers and give them the opportunity to shine. I just find it so inspiring to see people who can sing, dance and act — which is something rarely done on screen nowadays at the truly independent level. So yeah, you can bet there’s gonna be tap dancing in the film.”

You bet I’ll be keeping tabs on King as well as this exciting independent film. It would be a real treat to host a screening here in Lowell should the timing work right — there’s nothing like watching talented, passionate people pursue their dreams, especially if it combines music, dance, soul, and cinema. Best of luck, Gary! Keep us posted!

Learn all you need to know about How Do You Write A Joe Schermann Song at JoeSchermannSong.com.

*I should point out, however, that “Glee” is NOT in my vocabulary (!)