The final chapter of the award-winning trilogy of documentaries on accused killers Damien Echols, Jason Baldwin, and Jessie Misskelley will air this Thursday at 9PM on HBO. Known as the West Memphis 3, Echols, Baldwin, and Misskelley were freed last summer after spending 18 years in prison. Their story was passionately told in two films, Paradise Lost: The Child Murders and Robin Hood Hills (1996) and Paradise Lost 2: Revelations (2000) — this week’s airing of Paradise Lost 3: Purgatory — directed by Joe Berlinger and Bruce Sinofsky, creators of the first two films — marks the cinematic end to the story and the closing of this haunting case.

ABOUT THE FILM
HBO Documentary Films’ Paradise Lost 3: Purgatory, the conclusion of the award-winning trilogy that spawned a world-wide movement to free three convicted men – Damien Echols, Jason Baldwin and Jessie Misskelley – known as The West Memphis 3, tells the complete story of one of the most notorious child murder cases in U.S. history. Provocative and timely, the film chronicles stunning new developments, culminating in the startling and unexpected conclusion just a few months ago, when Echols, who was on death row, and Baldwin and Misskelley, who were serving life sentences without the possibility of parole, were finally freed from prison after more than 18 years. “Almost 20 years and three films ago, HBO’s Sheila Nevins sent us on this journey to document the terrible murders of three innocent boys and the subsequent circus that followed the arrests and convictions of Echols, Baldwin and Misskelley,” says filmmaker Joe Berlinger. “To see our work culminate in the righting of this tragic miscarriage of justice is more than a filmmaker could ask for.”  — (Read the complete synopsis on HBO Films’ official website.) 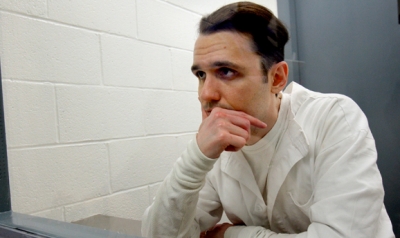 Damien Echols of the West Memphis 3.

Paradise Lost 3: Purgatory premiered to the public at the 2011 Toronto International Film Festival in its original form, but was then lengthened by 12 minutes to include the stunning verdict of innocent after the men were freed. According to the film’s official site, the West Memphis 3 were given a round of applause and a standing ovation at the New York  Film Festival where the longer version was screened to an audience of 1200 supportive fans. This was their first public appearance together since their departure from the Arkansas courthouse.

For complete details on Paradise Lost 3: Purgatory and Thursday’s presentation, CLICK HERE to visit the official site on HBO Films.