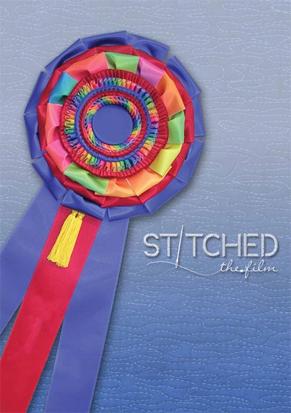 One of Lowell’s highly anticipated festivals, the Lowell Quilt Festival, comes to downtown this Thursday – Saturday, August 11-13. Presented by the New England Quilt Museum, the Festival showcases handcrafted quilts from around the world in a gorgeous array of colors, styles and sizes. Officially dubbed “IMAGES,” the Lowell Quilt Festival gets bigger and better each year. And before you scoff or furrow your brow at the notion of a festival of quilts, be warned — the unbelievable artistry WILL win you over.

This year, we’re elated to say the Festival will feature TWO free screenings of the 2010 documentary Stitched on Friday, August 12 at 5PM and 6:30PM at the American Textile History Museum. There are over 21 million quilters in the U.S. alone — like any other artistic genre, quilting has its own industry and subculture, complete with controversial superstars. Stitched follows three of these mega-star quilters as they race to complete their entries for the 2010 International Quilt Festival in Houston — the largest quilt show in the nation drawing more than 50,000 enthusiasts — where art, craft, controversy and friendship intersect. Though each of these quilters (two females, one male) believes THEIR quilt should win top prize at the Houston extravaganza, they are also close quilting friends. Getting to know these three artists, their bond with each other, and their dedication to achieve their dream is what drives this spirited documentary.

Created and conceived by a Houston-based filmmaking team led by director Jenalia Moreno, Stitched is hot off its April 2011 premiere and is on its way to D.C., Tennessee, Texas, and even a grand 9-day tour of Ireland after it hits the Mill City this Friday. We love that Moreno helped fund the project through a successful Kickstarter campaign this past February — this method is fast becoming the way to go for indie filmmakers to fund their work and get it out to the masses. On that note, thanks to the Festival organizers for bringing this independent film to Lowell!

For details on the Lowell Quilt Festival and its special screening of Stitched, visit LowellQuiltFestival.org and click on their Schedule of Events.