On this Memorial Day 2011, we share with you one of the film industry’s most beloved, most honored classic films. Directed by William Wyler, The Best Years of Our Lives garnered eight Academy Awards in 1946, including an honorary award to first-time actor and U.S. paratrooper Harold Russell, whose depiction of Homer Parish is sympathetic, real, and painful. With his honorary award, Russell is the only person in Oscar history to receive two statuettes for the same role. In searching for the film’s official trailer, we encountered someone’s own re-edited work — we were so struck with their compassion and obvious love for the film that we thought it fitting to include it here instead of the original Hollywood cut (kudos to E. Nicholas Mariani for taking the time to create this adaptation). 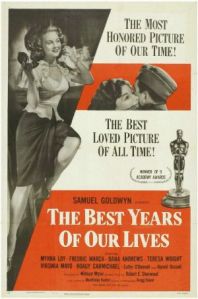 For great insight into the film, CLICK HERE to see an installment featuring Robert Osborne and Academy Award-winning actor Joe Pantoliano on Turner Classic Movies. Pantoliano is apparently a huge fan of the film and opens up this segment with Osborne by saying it’s one of the greatest movies ever made — here they give an introduction to the film as well as post-viewing comments. Next time you’re in the mood for a Hollywood classic, we hope you consider adding The Best Years of Our Lives to your Netflix queue or must-see list. You will not be disappointed.