Wish you could bring back those days of the original, old movie theater? Thanks so much to our good friend Nancye Tuttle who tipped us off to this very awesome exhibit now showing at Lexington’s National Heritage Museum: “The Art of the Movie Theater.” Journey back in time with photographer Stefanie Klavens and see her stunning photos of America’s most treasured movie palaces. The fact that they were CALLED “movie palaces” is a wonder in itself. 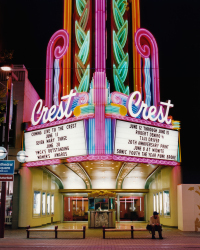 During Hollywood’s golden age, from the 1920s through 1940s, nearly every American city and town had its own movie palace. Whether an extravagant, neon-clad jewel or a more modest structure, the neighborhood theater was a center of community life. Exhibiting a wide range of flamboyant architectural styles, America’s historic theaters have entertained millions, first as vaudeville houses and later as movie theaters.

During the Depression, these lavish theaters offered moviegoers an escape from hard times into a world of illusion. But as the post-World War II boom fed migration to the suburbs, many downtown palaces closed. Multiplexes later presented stiff competition for single-screen theaters by offering a choice of films at one convenient location. Some architectural treasures have been saved, finding new life as performing arts centers, but most are lost forever. In fact, in 2001, the National Trust for Historic Preservation placed the historic theater atop its Most Endangered Historic Places list.

Boston photographer Stefanie Klavens’ interest in 20th-century popular culture inspired her to begin shooting these images of grand picture houses over a decade ago. Regularly attending the Senator Theatre while growing up in Baltimore, Klavens always felt there was something special about the theater. Only years later, however, did she fully appreciate its 1930s Art Deco design. Not surprisingly, it was among the first venues she photographed.

Her continuing photographic journey has taken her all over the country, photographing ornate city palaces and intimate small-town movie houses. As more of these historic buildings close, Klavens documents this vanishing era in American culture.

About the Project: Klavens works in the traditional method, shooting on film, using only available light and long exposures for her interior views, and printing the photographs herself. All prints are loaned by the photographer.

The presentation of this exhibition has been supported by the Scottish Rite Masons of the Northern Masonic Jurisdiction, U.S.A.